The resurgence of the cupcake’s popularity in the past decade has made it a must-have at birthday parties, bridal showers, stork parties, weddings, hen paries (cue rude, anatomically correct, male body parts) and  larny corporate canteens.

In fact, a few years ago, this #foodie ‘fad’ whipped right out of hand and suddenly there were #cupcake shops on every corner and renowned chefs – heck, even domestic goddesses – were bringing out glossy recipe books and dedicating entire TV cooking show seasons to the art of creating the perfect cake-in-some-fancy-paper!

This party-pleaser was originally a bite of vanilla sponge (chocolate if you had been good) smeared with sickly sweet icing in Mom’s colour of the day and served at kid’s parties. Snotty toddlers on sugar highs would then lick off the offensive icing  take a bite of the cake and abandon the leftovers in the dirt under the swing for Rover. 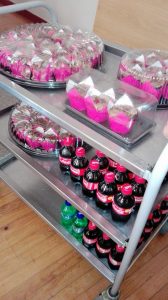 Suddenly this sweet treat evolved into an ‘adult’ anomaly, with celebrity status – and would be the showstopper at any soireé, if you were a half-decent hostess. New, divine flavours unheard of by the common ‘housewife’ , popped onto the scene….from Salted almond brittle and creme brulee to #Tiramusu-with-a-twist.

Competition was fierce and everyone wanted a bite of the action. Non-bakers took classes, TV channels aired 24/7 in every home and even gym bunnies got fat.

These kitchen creations  were bedecked and bedazzled with pedigreed frosting and  (in)edible sugar trinkets that most kids refused to eat or, ironically, would prove to be a serious choking hazard. I will not digress further by going into the cost and logistics of trying to evacuate a fondant fuschia flower out of an eleven year old’s ear.

Of course, as each baker tried to outdo the next, win a car or create  life-like English roses with an ombré effect, the cost per cupcake soared. We lost perspective and common sense. We focussed on looks (colour, bling and expensive casings); and forgot about the inside – the CAKE bit. So the whole fad became a rather unpalatable affair and even avid cupcake converts began to wonder if it was not a tasteless facáde as plenty of these showpieces lacked substance. There was no real value on the inside.
At Tolbos, we have learnt that what is in a cupcake is definitely just as important as what’s on top. We use generous, tried-and-tested recipes. The sponge is soft, fluffy and full of flavour.

Ask for our fresh bakes daily.